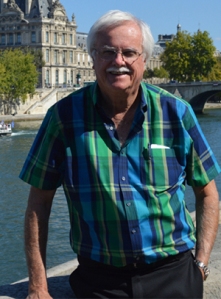 Dave Murphy’s early days centered on architecture and home design and renovation. After retiring from decades as a corporate executive at Marriott headquarters in Bethesda Maryland, he noticed a story in a local Maryland newspaper – local artist John Pringle was offering beginning water color classes at the Kent Island Federation of Art. Fifteen years later, painting has become Dave’s calling in retirement.

Years studying with John led to following other instructors such as Bill Younger, Peggy Blades and Paul Taylor. His latest jump in technique comes from weekly classes with Barbara Jablin, the Grande Dame of watercolor in St. Michaels. Dave has served as a board member of several local art organizations, and today produces art classes and shows throughout Maryland with organizations such as the Annapolis Maritime Museum, the Compass Regional Hospice (formally Hospice of Queen Anne’s) and the Annapolis Watercolor Club.

His subject matter is exclusively images of the Chesapeake, much to the chagrin of his fellow artists.  They often comment that he doesn’t paint anything without a boat in it, although this isn’t quite the case – but almost. In his paintings he captures memories and the peaceful mood of the Bay area, with a signature style of strong color and impressionism. His passion comes from boating and living around the Eastern Shore and Annapolis for many years. Today he paints at his home in Annapolis and does all his own framing in a Kent Island framing studio. His work is often seen at local art shows and galleries on the Eastern Shore and Annapolis. Sign up to receive email news about Dave’s next art show.